In July 1949, well before Boston, Salem embarked on its own “Big Dig” project. To better manage the city’s increased downtown traffic and unite the divided shopping district, city officials proposed the reorganization of Salem’s railroad system, including the replacement of the 1839 railroad tunnel. A new tunnel was recommended; it would move the tracks underground from Bridge Street through Washington Street and to the foot of Canal Street. The $5,500,000 project was overseen by contractor Tony Farina of Farina Brothers, Inc. and was divided into three stages. The plan was met with both optimism and apprehension by locals and business owners. Many merchants worried that instead of bettering Salem’s downtown, the construction would ultimately drive shoppers away. The project was often met with delays, partly due to the fact that regular railroad traffic could not be halted during the construction process. Portions of the new tunnel were built while the old tunnel was still in service only feet away. 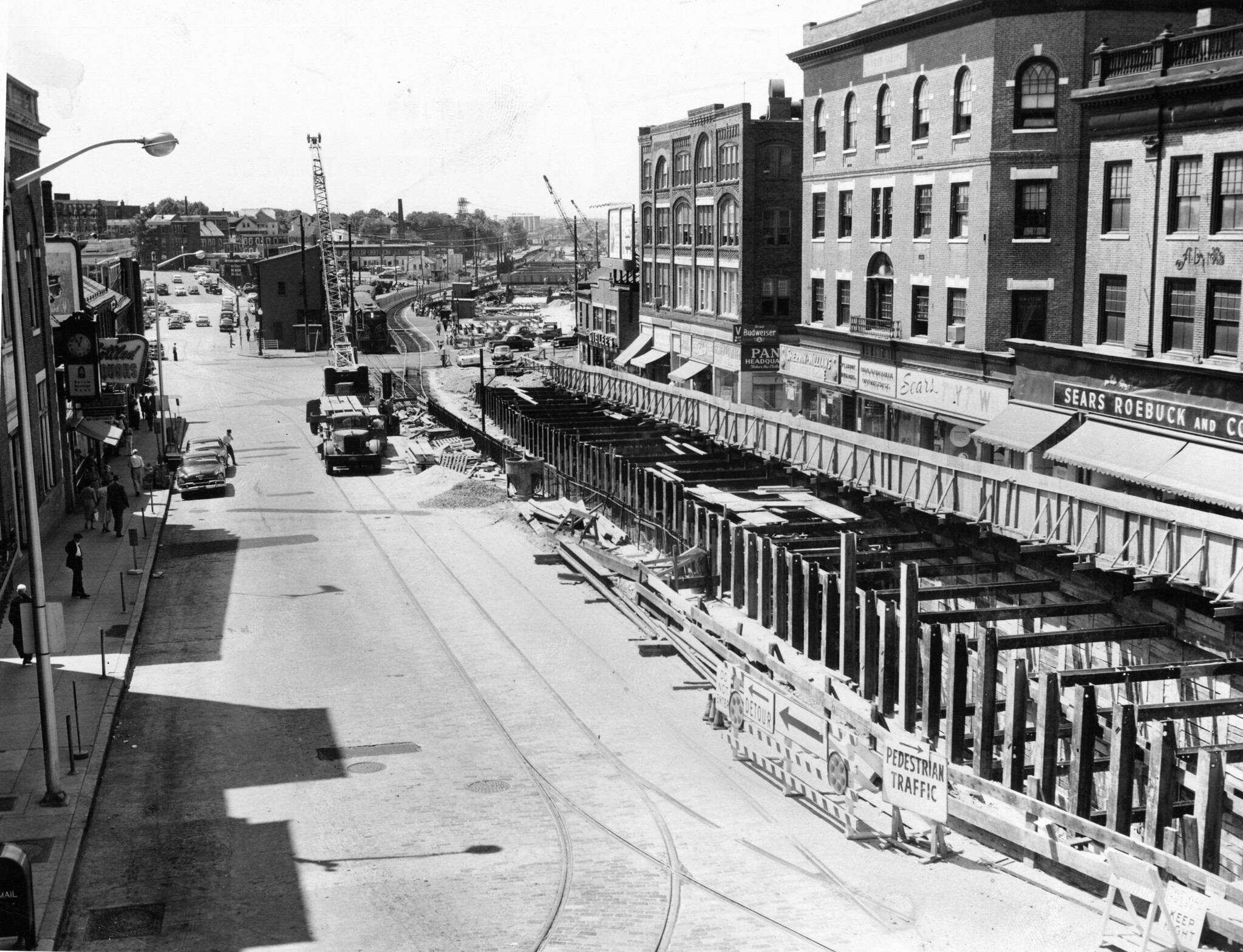 After nearly a decade, on Friday July 31, 1958, a crowd of 10,000 gathered to watch the end of one era and beginning of another. The last train through the old tunnel departed, as scheduled, for Boston at 8:12pm. It was followed by a brief ceremony with local officials and a ribbon cutting for the new tunnel by Boston & Maine Railroad President Patrick B. McGinnis. At 9:15 pm, a special train from Beverly with over 600 people on board made the first passage through the new tunnel as crowds cheered from above.

In the following days, after serving Salem for 120 years, the old tunnel was filled in and Washington Street paved. Boston & Maine Railroad reminisced about this transformation in their Fall 1975 bulletin, stating:

“Looking back today, the glory that was promised Salem by the opening of the new complex has not come to pass. Beset by all the problems of cities in general, Salem has fared worse than some. The merchants’ early fears that many customers lost during the years of upheaval during construction would not return seem to have been valid. Many people who regularly took the train to Salem to shop gave it up due to the inconvenience of its location and the climb to street level. Today, besieged by the suburban shopping centers on all sides, Salem has turned to Urban Renewal as a last resort to save itself. Much progress has been made but only time will tell what effect it will have on the city’s prosperity. In any case, an era ended with the removal of the railroad from the streets of Salem. It is too late to change of that.”

Enter your e-mail address to receive notifications of new posts by e-mail.