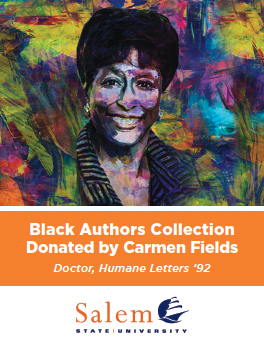 In 2021, journalist Carmen Fields donated an extensive collection of books by Black authors to the Salem State University Library.

Highlights of the collection include several signed, first-editions of work by authors such as Alice Walker, Maya Angelou, Muhammad Ali, and Colin Powell.

Carmen Fields is an Emmy award-winning local TV news host and Pulitzer Prize winning journalist. For 24 years, Fields has hosted and produced the long-running monthly public affairs show Higher Ground for WHDH-TV Channel 7 in Boston. Her career began in 1973 when she became one of only two female Black reporters for the Boston Globe. She was part of the Globe team that won a Pulitzer Prize for its coverage of Boston's court-ordered busing plan to desegregate schools in 1975. To learn more about the life and career of Carmen Fields, see an article from Boston University's College of Communication, titled "Carmen Fields Tells Her Story", published in July 2021.