The spontaneously hypertensive (SHR) and the Lewis (LEW) rats have been proposed as possible animal models of attention-deficit/hyperactivity disorder. Because the rats in these two strains do not differ in genotype, using the SHR and LEW rats as experimental subjects allow researchers to observe possible dissociations between genetic and environmental aspects of impulsive behavior. In the present study, we examined response acquisition, inhibitory control, and response restoration in SHRs and LEWs. Both strains showed similar acquisition and maintenance of lever pressing along trials of a positive automaintenance procedure. The SHRs showed less inhibitory control of lever pressing along trials of a negative automaintenance procedure, which resulted in more omissions of food reinforcers as compared to the LEWs. In a final phase of positive automaintenance, lever pressing restored faster in the SHRs. Also, rats in both strains pressed on a lever that was never paired with food delivery. These findings suggest a learning deficit or memory insufficiency in the SHRs, which showed more impulsivity and less behavioral inhibition than the LEWs. 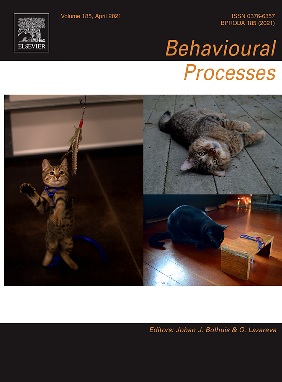 We analyzed the magnitude effect in Spontaneously Hypertensive (SHR) and Wistar Kyoto (WKY) rats choosing between a smaller-sooner (SSF) and a larger-later food (LLF) in the initial link of a concurrent-chains procedure. The SSF was delivered immediately in one terminal link and the LLF delayed 0.01, 5, 10, 20, 40, or 80 s in the other terminal link. An ABABA design varied food amount, 1 vs. 4 and 3 vs. 8 food-pellets in conditions A and B, respectively. The SHRs made more impulsive choices than the WKYs. The hyperbolic-decay model and the Generalized Matching Law fitted the data well. Discounting rate (k) and the area under the discounting curve (AUC) for the choices made by the SHRs in conditions A, were like those in conditions B. For the choices that the individual WKYs made, k was slightly higher and AUC smaller in conditions B than in conditions A. For both strains sensitivity to the immediacy of the LLF (s) was slightly higher in conditions A than in conditions B. Thus, we found no conclusive, compelling evidence either supporting or discarding the magnitude effect in the SHRs and scarce evidence supporting an effect opposite to the magnitude effect in the WKYs. 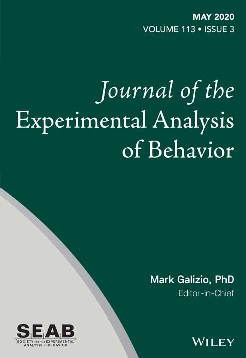 The multiscale molar view sees behavior as a flow, like a river, extended in time. Matching theory expresses the way activities compete for time. Relative time taken by any activity depends on relative induction. The present experiment tested matching theory applied to concurrent contingent and noncontingent food. As adjunctive activities that compete with operant activity, we recorded hopper head entries and presses on a lever near the food hopper that had no programmed consequences. Eight naïve rats were first exposed to a variable‐time 60 s schedule, which across conditions was gradually transformed into a variable‐interval 60 s schedule by increasing the proportion of food that was delivered contingent on pressing a lever far from the hopper. Another group of 4 rats that had been trained to press a lever near a food hopper were introduced in the second condition, in which one food delivery was contingent on far‐lever pressing. We found induction following a power function to describe pressing on the far lever (operant activity). Matching theory combined with power‐function induction also accounted for adjunctive activity. Results with single contingent food deliveries provided little support for the molecular view that behavior consists of discrete responses “strengthened” by immediately following reinforcers.

School counselors need to search their community for the resources and contacts needed to help their students succeed. I was recently fortunate to utilize Lynn Community Television as an outstanding source for obtaining help for students. I was the show host and was able to produce a number of shows in that capacity. The shows involved interviewing guests who had career backgrounds which could inspire students and help them to make good career choices. One show highlighted a student who wished to major in Media and Communication. Professor Amy Smith from the Media and Communications Department of Salem State University helped me make a connection between the college and two interested high school students. Two students were in the TV studio working the cameras at that time. They became instantly excited by being on the show. The students were seniors and TV majors in the local high school. The students took Professor Smith’s card and were promised a tour of her Department.