In the Koobi Fora region of the northeast Lake Turkana Basin (Kenya) dozens of archeological sites have been studied for decades in order to understand the behavior of Early Pleistocene hominins. Data collected from these sites have been important for demonstrating the manufacture styles of Oldowan stone-tool users, hominin dietary preferences, and processes of Early Stone Age site formation. A particularly rich locality is collection Area 130. Area 130 is noteworthy for hominin fossils KNM-ER 1805 (Homo) and 1806 (Paranthropus) as well as the FxJj 18 site complex, which represents one of the type localities for the Developed Oldowan of Koobi Fora. However, despite research beginning in the late 1960s, and several revisions to the stratigraphy and dating of the Koobi Fora Formation, few published studies provide a detailed chronostratigraphy for Area 130. The lack of a detailed chronostratigraphy has contributed to conflicting interpretations for the dates of the hominin fossils and archaeological sites. Here we present new geochronologic and paleomagnetic data to develop a chronostratigraphic framework that allows us to directly assess the age of the sediments, fossils, and artifacts from Area 130. Individual pumices from the Orange Tuff marker level and a previously unnamed tuff exposed near the FxJj 18 archaeological site complex (referred here as the FxJj 18 tuff) were analyzed for high-precision single crystal 40Ar/39Ar dating and dated at 1.763 ± 0.007 Ma and 1.520 ± 0.005 Ma respectively. Concurrently, we collected orientated paleomagnetic samples from stratigraphic levels of the KBS Member in Area 130 and used them to develop a magnetostratigraphic section. Our findings can be used to refine the sequence and chronology of the archaeological and fossils sites from Area 130 and other penecontemporaneous sites within the Lake Turkana Basin. Our data show that the first appearance of the Developed Oldowan for Koobi Fora does not correlate with any obvious evolutionary changes represented by the local hominin hypodigm nor with the arrival of a cognitively advanced hominin. Therefore we speculate that the advent of this more sophisticated type of stone tool was a response to a change in the diet of the genus Homo.

Abstract:
Aqueous solutions containing the nanoscale uranyl peroxide cage clusters U60, [(UO2)(O2)(OH)]6060−, and U60Ox30, [{(UO2)(O2)}60(C2O4)30]60−, were monitored by in situ Raman spectroscopy during stepwise heating to 180 °C. In solutions containing U60, clusters persist to 120 °C, although conversion of U60 to U24, [(UO2)(O2)(OH)]2424−, occurs above 100 °C. U60Ox30 persisted in solutions heated to 150 °C, although partial conversion to smaller uranyl peroxide clusters species was observed beginning at 100 °C. Upon breakdown of the uranyl peroxide cage clusters, uranium precipitated as a compreignacite-like phase, K2[(UO2)3O2(OH)3]2(H2O)7, and metaschoepite, [(UO2)8O2(OH)12](H2O)10. The role of the countercations, oxalate bridge, and solution pH are examined in order to better understand the mobility of these species at elevated temperatures. 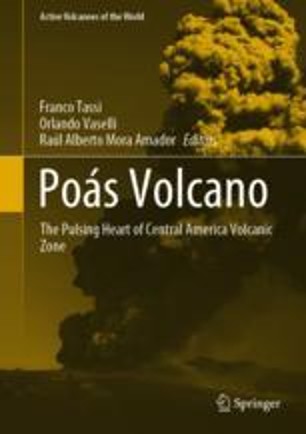 Abstract:
A landslide susceptibility model for Poás volcano was created in response to the most recent event that triggered landslides in the area (the Mw 6.2 Cinchona earthquake, which occurred on the 8th of January, 2009). This earthquake was the sixth event related to destructive landslides in the last 250 yr in this area and it severely affected important infrastructures. This chapter refers to a study, which consisted of three phases, as follows: (1) creation of a post-Cinchona earthquake landslide catalog, which was done manually based on a set of high resolution orthophotos and LiDAR data and it includes 4,846 landslides; (2) a landslide susceptibility model, based on the Mora-Vahrson-Mora method, the data from our landslide inventory, and a new modeling of earthquake triggering indicators based on the attenuation of the peak ground acceleration of the event, and (3) an evaluation of the methodology used, which for the Cinchona case resulted in an overlap of the actual landslides and the higher susceptibility zones of ~97%. Based on our new methodology, four landslide susceptibility models were simulated: the Cinchona earthquake, the Mw 5.5 Sarchí earthquake 1912, and two hypothetical earthquakes: one on the Angel fault (Mw 6.0) and the other one on the San Miguel fault (Mw 7.0). The Toro and Sarapiquí river canyons, the non-vegetated corridor located west from the main crater of Poás and the areas where the La Paz Andesites Unit are located are always the zones with the highest susceptibility to slide values. Meanwhile, the northern part of the study area, where the Río Cuarto Lavas unit outcrops, always presented the lowest susceptibility values due to both the low slope angles and weathering level of its rocks.

Abstract:
In this chapter the stratigraphy of Poás volcano by using geological, petrographical, geochronological and geochemical analyses on the volcanic products erupted during the last 600 ka is defined. The northern flank of Poás consists of the following Units and Members: Río Sarapiquí, La Paz, Puente de Mulas Member (possibly from another source, though interdigitated with Poás products), Río Cuarto Lavas, Von Frantzius, Congo, Bosque Alegre and Laguna Kopper. The products on the southern flank are the Colima Formation, La Paz, Tiribí, Achiote, Poasito, Sabana Redonda and Poás Lapilli Tuff. The central part of the volcano is made up of the Poás Summit Unit, which includes the Main and Botos craters. Rock composition varies from basalts to dacites. During the last 600 ka the content of K2O and other oxides (e.g. TiO2 and P2O5) and trace elements (e.g. Zr, Ba) has varied significantly through time, implying the presence of two geochemical end-members since the beginning of the magmatic activity at Poás: (1) the Sabana Redonda Geochemical Component (TiO2 > 1%) enriched in HSFE and other trace elements, present in La Paz Andesites, Lavas Río Cuarto, Poasito, Sabana Redonda, Poás Lapilli Tuff and Botos crater lavas and (2) The Von Frantzius Geochemical Component (TiO2 < 0.8%) that was recognized in the lavas from the Main Crater, Von Frantzius, Achiote, Bosque Alegre, Congo and Botos. Lavas related to both magmatic components have coexisted over time as indicated by those found at Botos and the Main Crater. Units possibly related to a common vent, i.e. La Paz, Achiote and Main Crater, the percentages of K2O and TiO2 decreased through time.

The Hominoidea (apes and, eventually, humans) and Cercopithecoidea (Old World monkeys) diverged from a common ancestor during the late Oligocene (~25 Ma) in East Africa. Subsequently, both catarrhine groups diversified in the early Miocene (~23-16 Ma), making this time period an extremely important one for understanding our (deep) ancestral roots and the link between our hominoid ancestors and the environment. A remote region of west Turkana known as Loperot provides an exciting opportunity to study early Miocene primate paleoecology and has the potential to reveal the phylogenetic relationship between cercopithecoid monkeys and stem hominoids. The site of LpM4 is particularly fossiliferous and has produced a diverse fauna that includes several catarrhine fossils that await description. Radioisotopic dating indicates that the Loperot fauna are older than ~17 Ma (early Miocene). Using geochemical data from paleosols and stable isotope values from rhizolith calcite, coupled with detailed sedimentology and stratigraphy, we reconstruct the early Miocene Critical Zone of Loperot to reveal a large perennial river system fed by ephemeral streams that created localized riparian forest microhabitats within a larger open ecosystem under semi-arid climate conditions, making Loperot's environmental reconstruction unlike many other early Miocene catarrhine-bearing localities. The perennial river system supported corridors of C3 forests; however, because these forests were restricted, they could not support a high diversity of forest indicator taxa. This is the most comprehensive analysis of the environmental conditions at Loperot to date, and provides new empirical evidence to suggest that African climate varied significantly by region and that arid habitats certainly existed during the early Miocene.